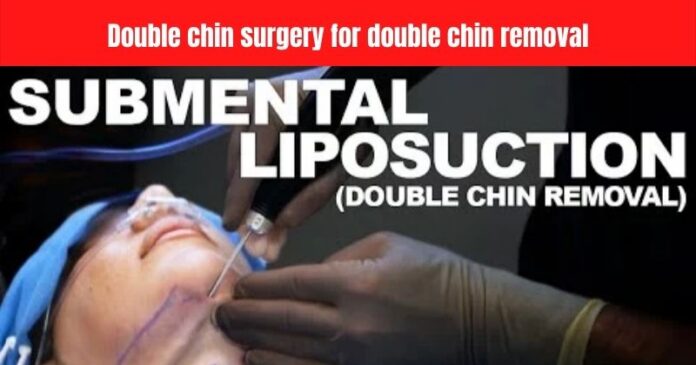 The double chin surgery also known as the Submental Lipectomy is the way to get rid of the excess fat that you under your chin.

The way the surgery is performed is that the small incision is made and the fat is sucked out using the liposuction method. That said the chances are the skin may be left hanging because of the earlier fat and to cure that the skin is removed and the new looking chin sutured. This double chin surgery may also be performed in conjunction with the standard neck lift or the cheek lift. In some cases the standard chin surgery is also performed. In the standard chin surgery the either the chin implants are added to give a good shape to a new chin or excess chin bone may be removed.

The cosmetic chin surgery is known as mentoplasty.

In the earlier days of the cosmetic surgery a routine facelift would be done to enhance the overall face and that will include the skin under the chin too but nowadays with the advancement of the techniques in the plastic surgery there are specific cosmetic procedure to make sure that the fat under the chin is removed and the double chin removal rather double chin reduction is done.

The double chin surgery nowadays is done with a very small cannula and the whole procedure is known as the tumescent liposuction. The small incision is made to insert the cannula and that cannula is less than 2mm in diameter. So there is no bleeding and after the operation the patient can easy begin work in two days time.

Before selecting a double chin surgeon make sure that you can get hold of the surgeon’s patients with their double chin before and after pictures so that you can see the results by yourself.

Keep in mind that to lose a double chin you have to first start with losing weight with double chin exercises and try the cosmetic surgery as a last resort.